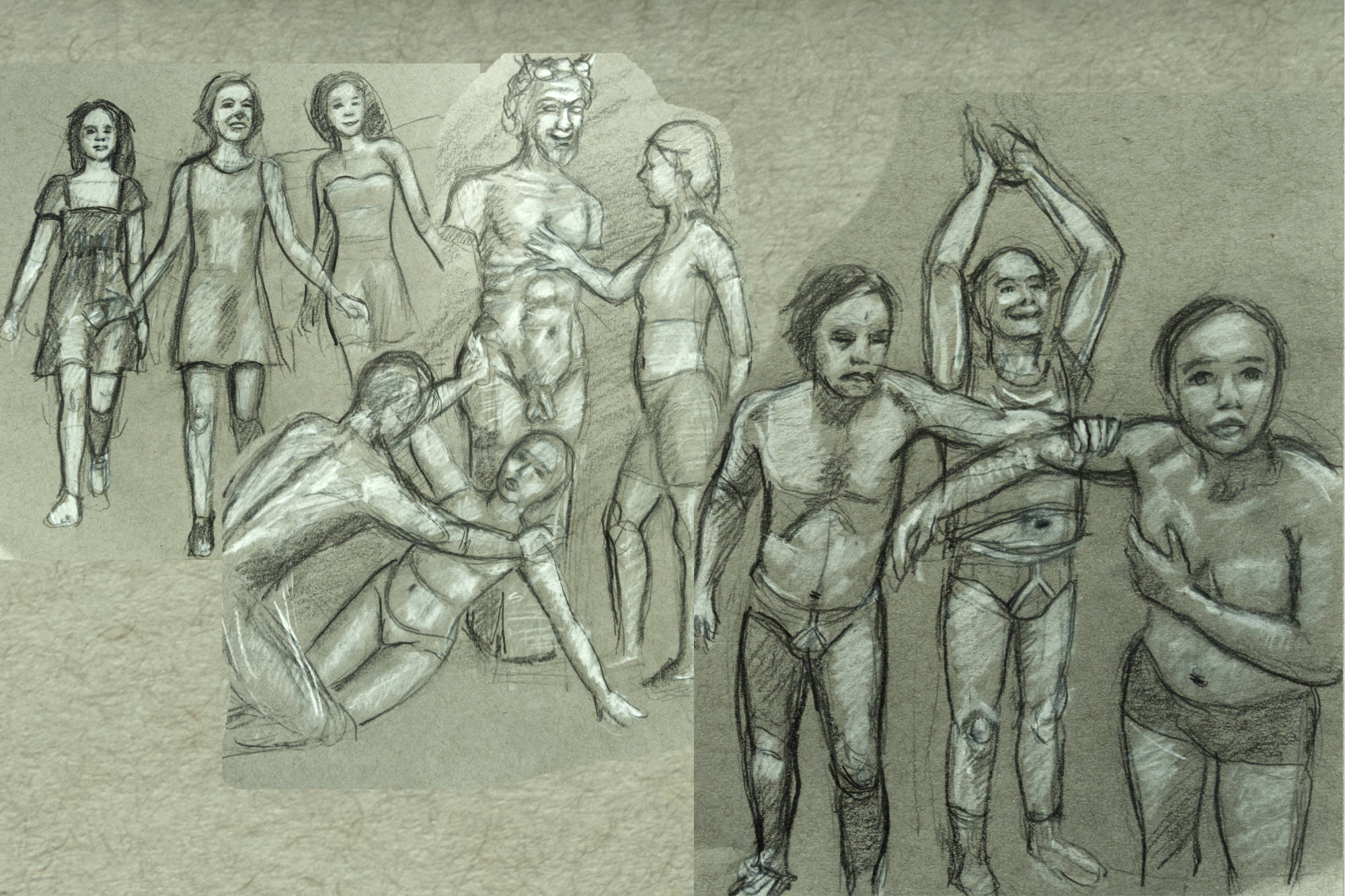 A few months ago I prepared a proposal for a really interesting art competition/bursary – The Concord Art Prize. Artists were invited to propose an artwork inspired by one of a list of ten pieces of music (I chose The Rite of Spring by Stravinsky). Shortlisted artists would be paid to produce their work. Definitely one to look out for next year.
Anyway, my proposal wasn’t accepted for the next round, which brought to a rather abrupt end a frenetic period where I was immersing myself in the music, exploring ideas, making numerous sketches and trying to produce something suitably compelling. Now I have to decide whether to continue working on the project, without funding or a prospective home for the finished painting.

In my proposal, I broke the composition into three sections:
In the first section I tried to capture something of the first tentative signs of spring, signalled by that wonderful bassoon in the original music, suggesting a new beginning. The end of winter; a time of joy and restored hope This was also at a time we were finally looking forward to a return to normality after the pandemic. I chose to depict three “maidens”, dressed in contemporary summer dresses; with a bouncing stride emerging from over the horizon on the left of the painting. More “The Sound of Music” than pagan Russia 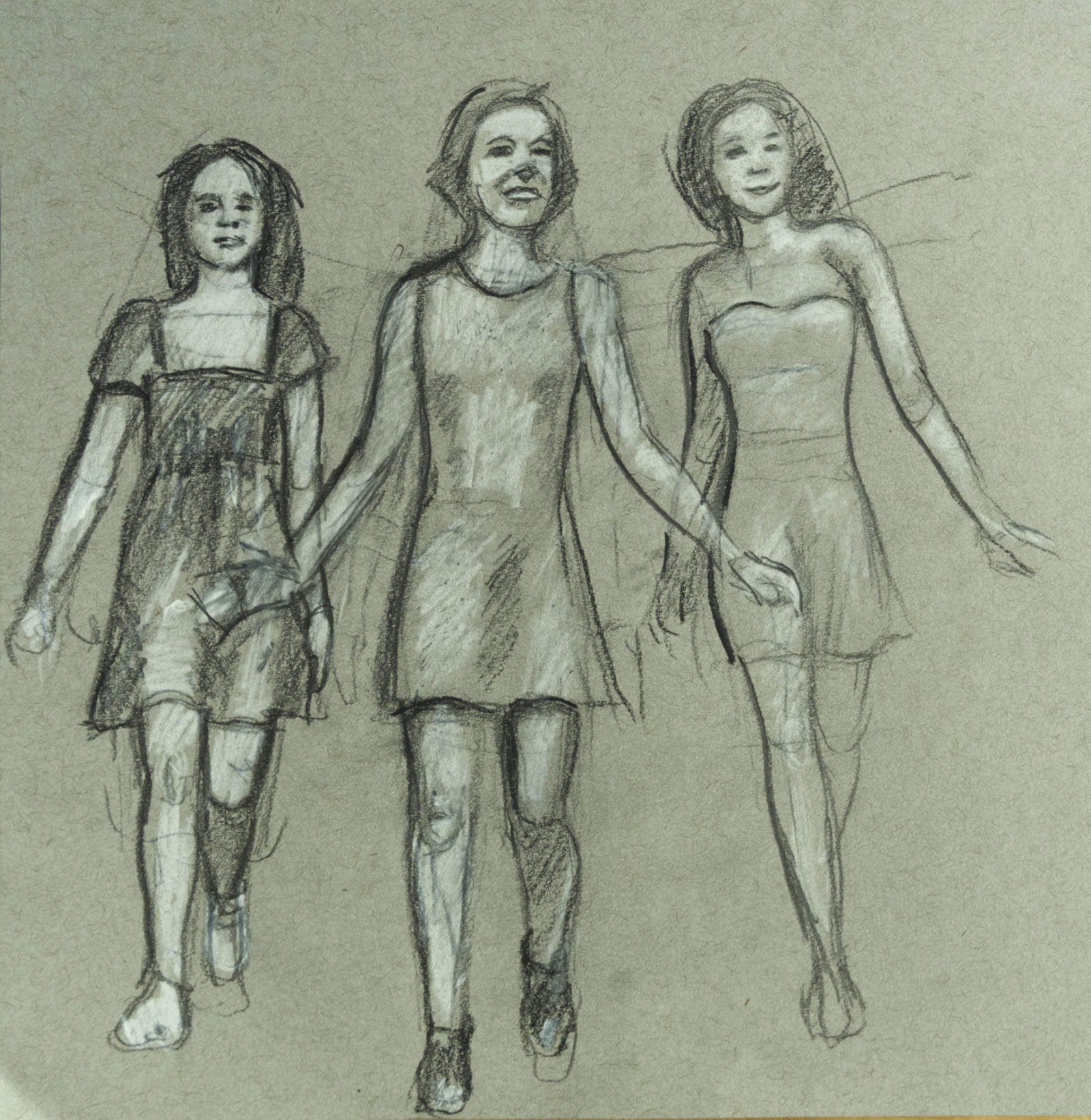 The next section is about the pounding, primal rhythm; the overt sexuality that pervades most of the work. Dancing and cavorting; all passion, desire and curiosity. In my preliminary sketch I featured a statue of Pan, with one woman touching the statue, while another couple, totally self absorbed, are cavorting at the foot. Other figures would be added in the area around the statue. I wanted it to look busy, chaotic, full of energy. 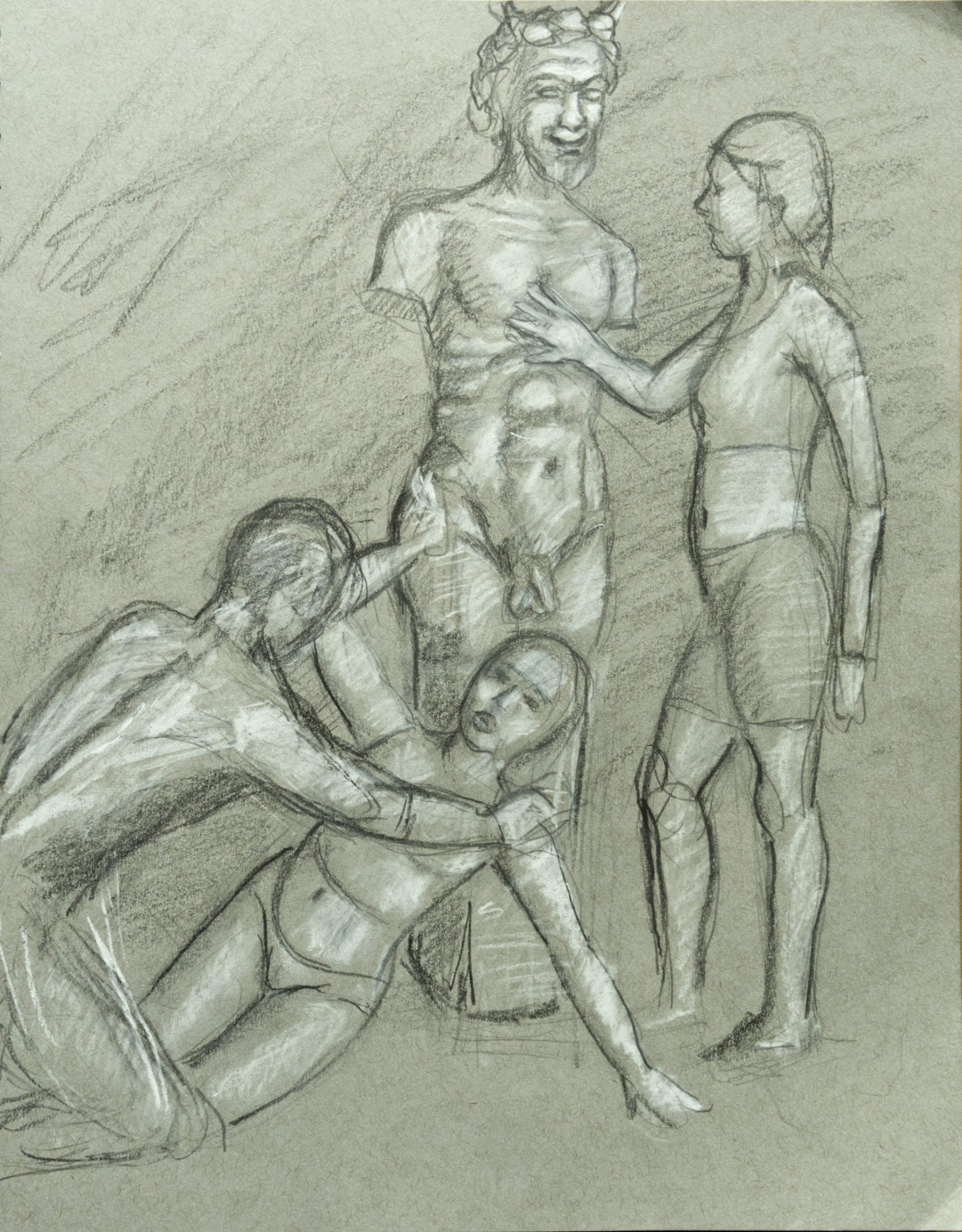 I wanted to end with a growing sense of menace. This time the pounding rhythm shouts danger. This final section has a woman in obvious distress, trying to avoid the clutches of sweaty, pot-bellied older men. I envisaged the men in grubby t-shirts and Y-fronts. There is nothing playful or innocent about this scene. I want there to be a stark contrast, a jarring change of tone, with the frivolities of the middle section. There would be a small crowd gathering behind. 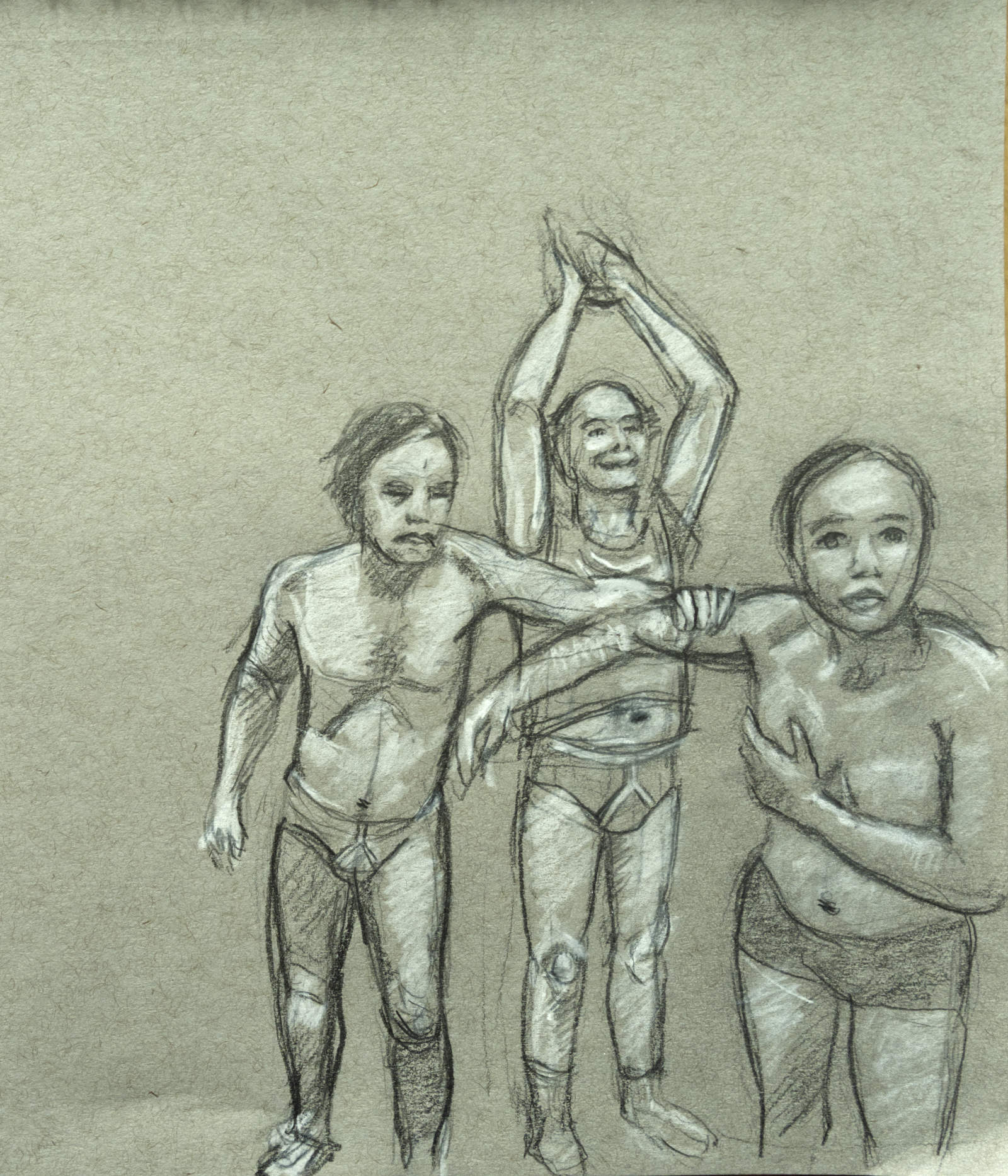 It’s been two months since I learned that my proposal wasn’t accepted. My initial reaction was to shelve everything. A large painting like this would take a considerable investment in time and money. Aside from the considerable cost of materials, there is the difficult task of finding models and arranging sittings; and that’s before you even put brush to canvas.
I embarked on a similar project some years ago – The Feast of Venus. I’d been invited to contribute to an exhibition with that theme. Having already spent a fortune on hiring models and renting studio space, I soon realised that I would miss the deadline for the exhibition. So instead of doing the sensible thing and abandoning the project, I went on regardless, and it turned into a quagmire, eating up all my time, money and energy. I did eventually finish the painting, but at considerable expense. I promised myself “never again!”

Well, I don’t always follow my own advice, and have since completed a few more larger compositions (Men in Suits for example, above). The difference this time is that these recent paintings have all been very focused on a common theme of sexuality, physical menace and the male gaze. That focus has made the execution of my ideas go quite smoothly. And I see this new project as a continuation of my work on the subject.
Which brings me to my dilemma. Having invested a couple of weeks work to get to this early stage, do I forget about it, and save myself a load of money, or do I proceed, and risk it turning into an act of sheer folly.
Hmm, decisions, decisions.

I will be showing five paintings at the forthcoming “The Nude” exhibition, at Candid Arts Trust. Amongst them will be my “Feast of Venus – A Re-imagining”, for its first excursion outside of my studio. It will be interesting to get some feedback on this particular piece, having worked on it for so long.

I’m looking forward to seeing them all on display together. Four of these paintings are the major works that I have been working on over the past year. Hanging them together, in a gallery environment, will help give me a clearer view of how my work has evolved.

Candid Arts have their gallery at 3 Torrens Street, London EC1V 1NQ. Preview night is on Thursday 29th September, 6-9pm. The exhibition is on from 30th September-9th October, open every day from 12-6pm.

Well, that was an experience. In the end, 900 people had visited Britannia Works, and most of them made their way up to our studio. Space Studios came good in the end, providing us with everything we needed to make the event happen. From what I heard from visitors, Britannia Works were judged to have put on a good show.

I made a mistake on Saturday, by trying to continue working on my Feast of Venus painting, and having it turned away from visitors. With no place to store it, I was reluctant to show it to people while far from complete. I changed my mind on Sunday, and it worked out well. It gave me an opportunity to discuss the meaning behind the painting, and why I’d spent so much time and money on this particular project.

Although it was a lot of hard work, the weekend was thoroughly enjoyable. It provided a great opportunity to discuss my work, and get feedback on my paintings. I learned a lot. I would like to thank everyone who visited our studio and made the event a success, and a special thank you to all those people who took the time to talk to us.